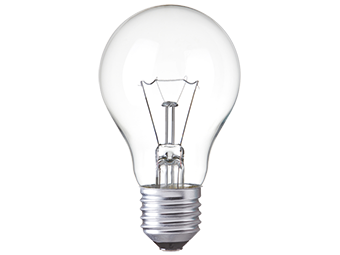 A Brief History Of Lighting

1879 - Thomas Edison invented a carbon filament that burned for 40 hours. Edison placed his filament in an oxygen-less bulb. (Edison evolved his designs for the light bulb based on the 1875 patent he purchased from inventors, Henry Woodward and Matthew Evans.)

1880 - Edison continued to improve his light bulb until it could last for over 1200 hours using a bamboo-derived filament.

1903 - Willis Whitney invented a filament that would not make the inside of a light bulb turn dark. It was a metal-coated carbon filament (a predecessor to the tungsten filament).

1906 - The General Electric Company were the first to patent a method of making tungsten filaments for use in incandescent light bulbs. The filaments were costly.

1910 - William David Coolidge invented an improved method of making. The tungsten filament outlasted all other types of filaments and Coolidge made the costs practical.